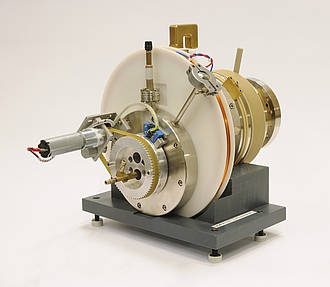 VARIS is a new generation of vacuum arc-type ion source. It was developed at GSI as a redesign of MEVVA and commissioned in 2004. VARIS is optimized for production of highly charged ions (up to 6-fold) and therefore it is foreseen for operation with heavy elements. It provides the best charge-state distribution for uranium ions (67% of 238U4+).

Compared to MEVVA ion source, VARIS has a smaller plasma chamber, shorter distance between anode and cathode and a more compact drift region to the extraction system. In contrast to MEVVA ion source, VARIS is equipped with two magnetic coils outside the plasma chamber for focusing and transporting the plasma. The cathode flange has a revolver system and is equipped with 17 cathodes, too. The specificity of VARIS is the absence of water cooling and a compact design.

The typical lifetime of one uranium cathode is about 8 hours and of the source is about 1 week.